There you are, in the team room with the unit. As the new guy, you stand, while others sit. You wait for your team leader to give you instructions. Keeping to yourself, you read your Ranger Handbook for the 12th time since you stood on that parade field receiving the honorable Tan Beret only weeks ago. You hear the clang of metal, as the team leader opens the squad locker, and you see him pulling at a knot of 550 cord, or paracord, and murmur not so gently under his breath. You feel your spine straighten as he turns toward you. He throws the massive entanglement at you. “New Guy, fix this Rat’s Nest.” Today will be a good day, at least you won’t be in danger of looking like you’re doing nothing. For those not looking to re-live the unknotting process, take a look at Quikcord. Call it paracord, call it 550 cord, anyone who’s had to deal with a rat’s nest, a gigantic knotted mess of the extremely useful material will know what we’re talking about. For those who use 550 cord for professional use or those who consider it a necessary component of any survivalist’s loadout, the one thing that it doesn’t do well is stay untangled. Amidst an emergency, where seconds count, is not the time to discover the 550 cord you were going to use has become a ball of cable that will take no less than 20 minutes to make useable. Inspired by stories like the one above, QUIKCORD has a solution to this problem, and the veteran-owned company is looking to solve a problem that grows as 550 cord continues to ball itself up when no one is looking.

In the world that we live in, a knotted ball of 550 cord shouldn’t demand too much attention. There are bigger threats to face, and bigger issues to solve. Any distraction from the mission, however, costs valuable attention. The simplicity of QUIKCORD, then, defines its value. QUIKCORD serves as an all-in-one paracord container, with added utility. One side captures a chem-light/glow stick for emergency signaling, and the other has a small blade built-in for cutting the cord. From both the top and bottom, paracord can be pulled out, snag-free. About the size of a Red Bull can, and made of a molded plastic, the QUIKCORD can fit in pockets, pouches, or a pack, and there it does what it should: go unnoticed until it is needed. Above: The build in razor takes the hassle out of using 550 cord for small, quick repairs.

It is easy to consider the military uses for QUIKCORD, and that comes naturally as the product was designed by a veteran. On its face, it looks obvious: a simple device to solve a simple problem. But that’s where the easy part of it ends. What does a review look like? What are the features to evaluate? What should it be compared to? Above: Though the QUIKCORD doesn’t really belong on a plate carrier, it fits well in a medium sized pouch.

The novelty of QUIKCORD gives it an advantage. There’s nothing quite like it in the market. For years, 550 cord has been carried in pockets, baggies, and pouches, so why something new? QUIKCORD is easy to use: it has a place to “capture” the loose end, and the protected blade means less time pulling out a fancy pocket knife, assuming one is carried. The chem light attached can be used as an emergency signal by letting out a few feet of the remaining paracord, and spinning the light like a helicopter blade above one’s head. It’s not a complicated tool, but it works.

Depending on how much 550 cord someone is trying to pack will heavily influence the use of a QUIKCORD carrier. The container will hold about 35 yards of 550 cord, but with practice packing it, a little more can fit in. This roughly takes up the same amount of space if an equal amount of paracord were put into a zippable bag with a chem light as well, so there’s very little added bulk. That doesn’t mean it’s soft and packs flat though.

Confident in its identity, QUIKCORD balances weight, strength, and cost-efficiency. Neither Bomb-proof nor disposable, the price tag communicates a set-it-and-forget-it level of use, that won’t make you wince if you have to replace it. That being the case, we wouldn’t recommend using it as an impromptu hacky-sack. To test the durability, we did what is expected in this industry: we threw it down a cement path, and then repeated the process after chilling the plastic in a freezer for a few hours. The scuffs added up over time but it never cracked thanks to the plastic used. The lid would occasionally disconnect itself, spilling 550 cord all across the pavement, but resucure each time it was put back together.

Storage space and weight rightly stand as the lead concerns when setting up a motorcycle, bicycle, or dirt bike for long-distance overlanding. Be it across highway or dirt, the precious space inside saddlebags and panniers cannot be wasted, and as ounces equal pounds, so do cubic inches add up quickly. With a little ingenuity and some awareness of both airflow, and which areas are protected on a motorcycle, a QUIKCORD canister can easily be secured to the frame, handlebars, or exterior of a pannier, thus saving space and keeping the 550 cord available. 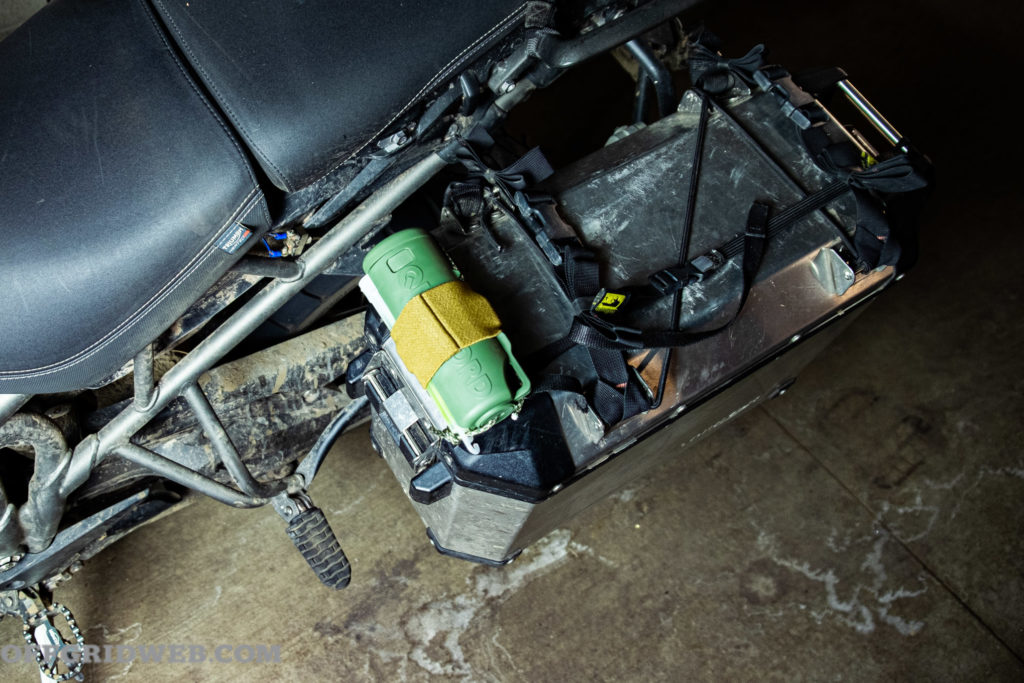 When doing this, however, we heavily recommend using a secondary method to contain the loose ends. With the wind constantly tugging at the exposed cord, and the likelihood of branches snagging on it when riding off-road, the last thing one would want is to risk serious injury and destroy their vehicle by 550 cord getting wrapped around the rear tire. Does it work? Yes. Does it solve all the worlds problems? No. Is it something everyone should have? Maybe. For those in the military, it has it’s uses, but will not replace the need for, say, 50 yards of 550 cord for Ranger School. At the same time, the new product has yet to grow into all of its uses, and the overlanding community will likely find it very useful. The best part of the QUIKCORD, however, is in its nature as an inventive piece of kit: after a short while of use, it will like go unnoticed, until it gets misplaced, and then the convenience of it will make its point loud and clear.

We’d like to see a few changes, however, some of them which could be solved by a little DIY. A form of Grip Tape on the outside of the cannister would help in cold or damn environments. Other than that, more ways secure it to a frame, bar, or webbing would be just the right thing for future use.

If you’re interested in pickup up a Quikcord, head to their website and use code OFFGRIDFAM for free shipping.